Noise is a constant problem in power-supply design. While there are FCC limits on the electromagnetic interference (EMI) radiating out into the air as well as the conducted noise that your design injects back into its input, your first noise problem is getting the noise low enough in your outputs.

Some engineers make a distinction between output ripple and output noise. Both phenomena are an unwanted signal superimposed on the pure perfect dc output you want (Fig. 1). The source of ripple is the periodic input frequency, as well as the switching frequency of the control chip. An ac-dc supply will have a 50-, 60-, or perhaps 400-Hz input frequency. No matter how good the switching chip you use, a little of this frequency will bleed though the switching circuit.

On top of any inherent ripple in the output will be random noise generated by the control chip voltage reference and all other sources of thermal, shot, and flicker noise . There are three common ways to deal with this noise, that often help with ripple as well: 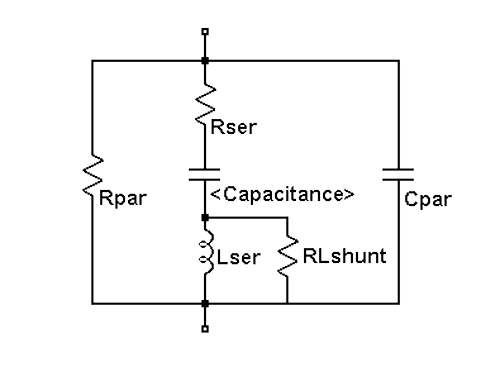 2. Capacitors have many stray elements, as is shown with this Spice equivalent circuit. The Lser and Rser in this schematic represent the equivalent series inductance (ESL) and equivalent series resistance (ESR). The Cpar, Rpar and RLshunt elements are usually negligible in most circuit applications. (Courtesy of LTWiki.org)

In addition to the natural output capacitance of the power supply, you might add a series inductor and another filter capacitor to further reduce output noise (Fig. 3). The inductor passes dc current with negligible loss, while providing a high-frequency impedance that the capacitor can react against to filter out the noise. In essence, you’re increasing the high-frequency output impedance of the supply so that you can more effectively filter it with smaller capacitors. 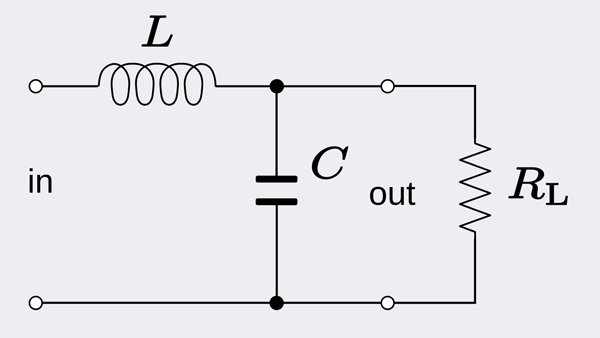 3. To lower the noise of a power rail to a load (R L), you can make an L-C low-pass filter. (Courtesy of Wikimedia)

The problem with adding LC circuits is that they have a natural resonant frequency. Thus, it may make your supply unstable or produce unacceptable ringing after transient load changes. If the supply is providing low currents, you may be able to use a resistor instead of an inductor. That will create a dc loss term, but the resistor also adds damping to your output filter.

One filter useful for switching spikes and other high-frequency output noise are ferrite beads . The magnetic coupling with the output trace or wire and the bead will attenuate the noise. Another output noise source might be electromagnetic coupling from the outside world. Here you use shielding to protect the power-supply circuit from external influences.

Also note that your circuit board traces have inductance, and you might need to tailor that with power planes and trace widths. Using twisted-pair wiring is a good way to reduce inductance in order to prevent ringing and overshoot spikes. Adding any filter may increase the startup time and transient response of your system. If you’re cycling power to take a measurement and then shutting down, you have to trade off the filtering effectiveness with your startup time requirement.

Perhaps less obvious, you can also reduce noise via proper bypassing of the control chips in your power-supply design. Bypassing the chips that being fed by the power supply will not reduce the noise at the supply, but it will be reduced at the power pins of the chips. When you bypass the chips in your power-supply circuit, use the normal guidelines of putting the capacitor close to the power pins and employ ceramic capacitors, preferably surface-mount, which have low ESR and ESL. Note that the capacitor’s physical size will dictate its effectiveness as much as its value (Fig. 4). 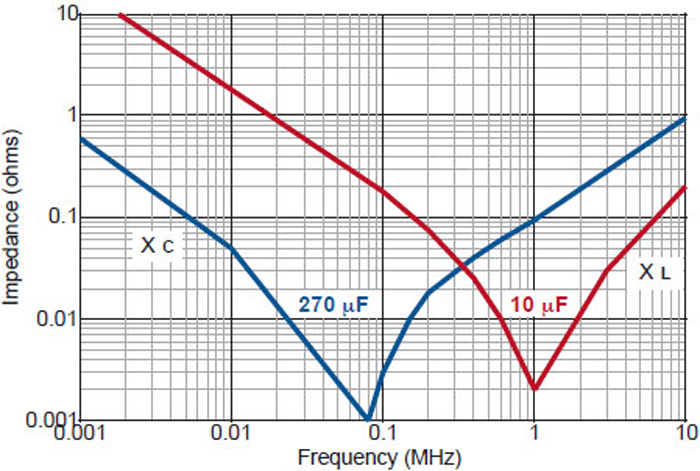 4. At low frequencies, the impedance of a 270-µF capacitor is lower than that of a 10-µF version, as you would expect. At 1 MHz, the 10-µF cap has a lower impedance due to self-resonance from stray inductance. You need to look at the impedance curves of various capacitor package sizes to ensure you’re getting the lowest impedance at the frequencies you’re trying to filter. (Courtesy of Johanson Dielectrics)

A good, but expensive, way to reduce power-supply noise is to put a second low-noise regulator on the power-supply output. This often involves a low-dropout (LDO) linear regulator. It will reduce any output ripple by an order of magnitude or more. Better yet, you can add an RC or LC filter after the LDO to reduce noise even further. The noise of a linear regular is often expressed as an RMS value over one or more frequency ranges. If you need a very precise and low-drift power source, you can use a reference chip instead of an LDO regulator.

One thing to keep in mind is the frequency ranges that experience noise. Amplifiers also have power-supply rejection, and this rejection drops off significantly at high frequencies. Unfortunately, the PSRR of linear regulators also gets much worse at high frequencies (Fig. 5). 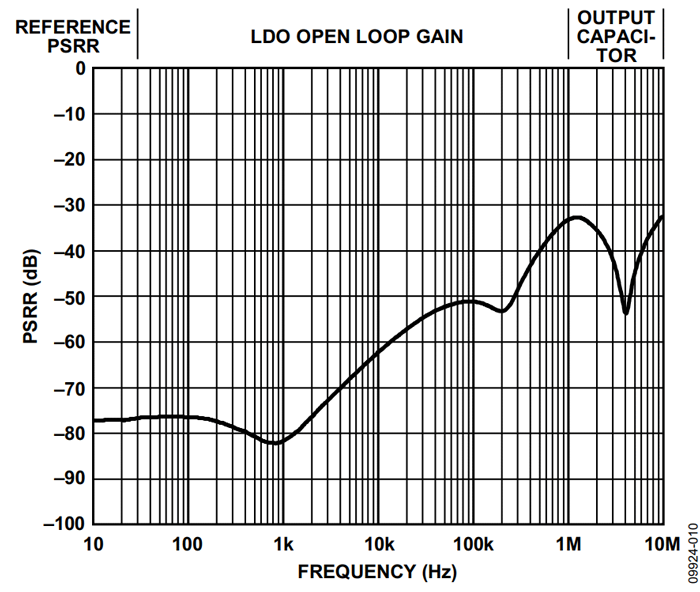 5. An LDO regulator has much better power-supply rejection ratio (PSRR) at low frequencies. The reference PSRR dominates at low frequencies, whereas the gain of the internal loop provides the PSRR at mid-range frequencies. At high frequencies, the output capacitors dominate PSRR, and the curve is similar to that shown in Figure 4. (Courtesy of Analog Devices)

However, such high-frequency noise is much easier to remove with LC or RC filtering, so all is not lost. The holistic approach is to remove noise at the input to the switcher, then bypass and make sure your switching IC chip is low noise. After that, pick a low-noise LDO linear regulator, so that you can then add an output filter. You should examine the PSRR of the chips you’re powering and intersect that with the PSRR of the linear regulator to remove as much noise as you can over the frequency bandwidth of your circuit. Then design the filter to remove sufficient high-frequency noise to achieve your signal-path noise goals.